Great excitement for Breaking Bad fans — the New Mexico Film Office announced that a major Sony Studios film will begin production in Albuquerque in a few weeks. Industry leaks indicate that this will be the long awaited big screen presentation of the iconic TV show Breaking Bad.

Owen was tugging on the leash to check out a discarded taco on a street in Albuquerque’s Old Town, recently, when we spotted a sign for a guided tour of important Breaking Bad production sites in and around the city. Owen’s interest waned when this particular tour meant spending three hours in a simulation of the Breaking Bad RV with strangers. Not in his nor the tourists’ best interest.

However, we Googled up several web sites that mapped the sites for key filming locations for those who wanted to drive around the area and find them without a guide. Here’s an example.

Perhaps, after walking in the Bosque, from time to time, we’ll use a shooting location map take in some Breaking Bad sites. 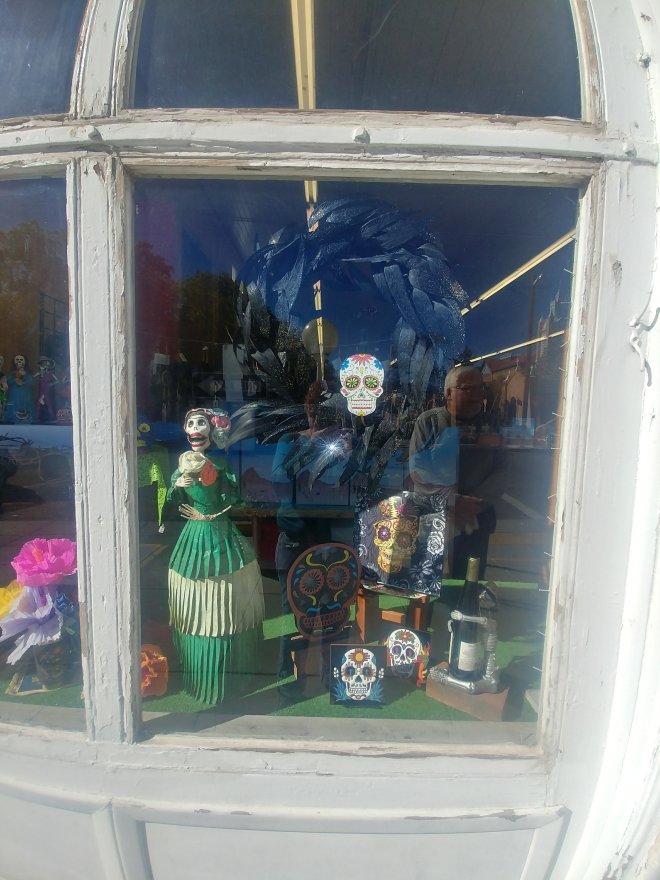 In Albuquerque, as in many Latino communities, we celebrate Day of the Dead as well as Halloween. It’s a lovely holiday that allows us to feel close to our departed loved ones. We build altars commemorating their lives, use marigolds to invite their spirits to visit and decorate with sugar skulls and other day of the dead regalia.

Instead of the scary aspect of Halloween, Day of the Dead celebrations are more like a celebration with family of loved ones.

Some additional activities in the area.

Zuni fetishes are beautiful art pieces which also have great meaning in Zuni culture. Each animal has particular powers to help people.

New Mexico Bead and Fetish in Old Town New Mexico has an extensive selection of beautiful hand crafted, artist authenticated fetishes. So recently, we made a visit there to pick up some specific fetishes for loved ones. They make great gifts, especially when a loved one is going through a difficult time.

Our approach to our backyard garden was to minimize our toil and, because we live in the high Chihuahua  Desert, water.  Our solution was to establish a backyard habitat populated with plants indigenous to this desert country. Two types of cacti were already thriving — a claret cup and a cholla.

We planted a few more specimens. This one is an early bloomer.

This claret cup cactus is nestling with a sage brush plant.

We added small agave of various types, and, over the years, they have flourished and created a fence of agave.

Salutary neglect along with Nature has produced a habitat in which lizards, bugs, birds, pollinators, and the occasional coyote make their living.

One of our favorite visitors is the roadrunner, a member of the cuckoo family. 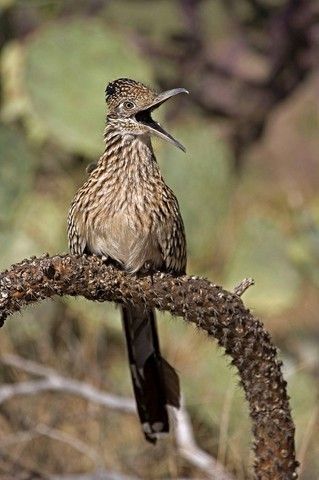 Roadie hunts lizards, bugs, nestlings; an opportunistic feeder. Roadie also hops onto our patio and peers through our sliding glass door. It’s as though he knows he’s safe behind the glass, and it appears he enjoys tormenting the cats and dog. “Roadie” is in Owen’s canine vocabulary, along with “mail truck” and “trash truck.” When we call out “Roadie!” Owen races to the patio door growling.

Roadie, our name for whatever individual hunts lizards and bugs in the habitat

Ray and I had so much fun trying out Taiko drumming in Tokyo that we decided to find classes in New Mexico. Bushido Kenkyukai is a well-known dojo for taiko drumming and martial arts. We went to an introductory class which included demonstrations by local students and practice drumming.

As usual, New Mexico artists have added their own twist to a traditional Japanese art. The New Mexico version includes more drummers, extra instruments, and special riffs that aren’t heard in Japan. Still, the foundation is traditional so it’s a fascinating fusion of cultures. 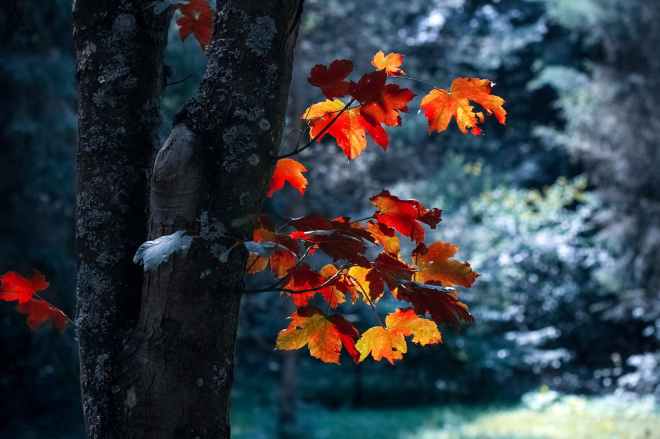 For practicing, since taiko drums are expensive, many artists make use of old tires coveted tightly with packing tape. 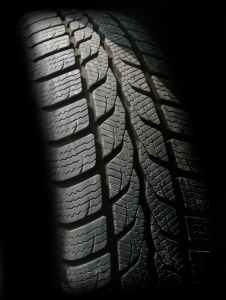 It doesn’t give the depth of sound that a real drum does but it definitely is good for an active taiko workout.

So, are you tempted to try taiko drumming?

Birds that live in the neighborhood and those that migrate through find our backyard habitat easy pickings.

All year round, various finches (gold, house, and who knows what) hang out in a desert willow tree and empty the feeder of nijer thistle seed in a day and a half, to the delight of our nearby bird feed storekeeper.

During the winter, we add a feeder with seeds for the canyon wrens and curved bill thrashers who hang out all year.

Pigeons and doves mop up the seeds that the more interesting (to us) birds dribble onto the ground. As do the ground squirrels. In the spring, a wide variety of hummingbirds migrate to New Mexico, so we put out a feeder with sugar water. We miss them when they migrate south at the end of September.

They are aggressive little guys. They buzz one another in aerial combat and even dive bomb us when we’re sitting on the patio. We discovered one of their nests, a tiny cup, on a branch of our apricot tree.

Upon occasion, the multiple birds in the habitat swish away, none to be seen. A hawk, usually a red tail but sometimes a Cooper’s) descends and perches in the desert willow, wondering why it was shunned.

Great horned owls frequent the Ponderosa pines in the front yard. They hoot in the wee hours before dawn and deposit pellets that provide clues to their diet.

Of course, the local cuckoo darts around the habitat during warmer months.

During the winter, the road runner descends into the Rio Grande Bosque. But, like the hummingbird, returns to our habitat in the spring.

Just past dawn, one morning, a coyote hopped over our garden wall and settled in under a bush for a nap. We had heard coyotes yelping from time to time during the night, so perhaps this one was part of that pack. We had seen them while hiking, but having one snoozing just outside the kitchen window was a new one for us. This picture of a coyote was taken in the Rio Grande Bosque. 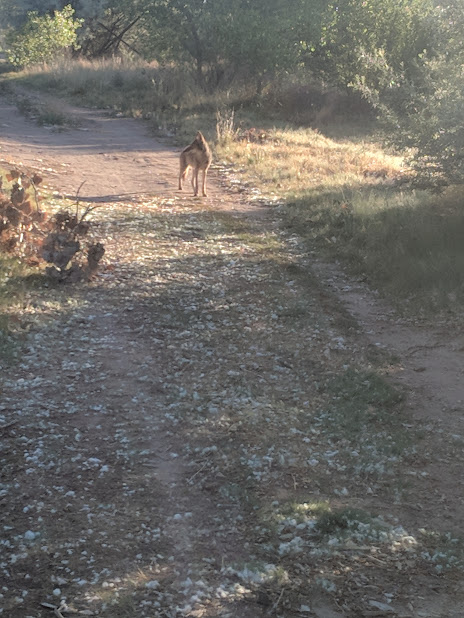 They are intelligent and curious creatures who shadow hikers apparently to see what humans are up to in their territory. 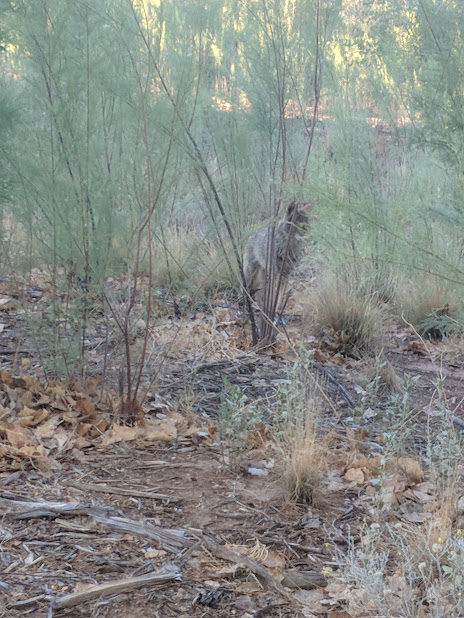 A coyote’s territory varies widely. In rural areas of the southwest and south, where resources are scant, a coyote might roam over forty square miles. With an urban environment or in the northeast, food sources are more plentiful and the range is much less. Coyotes now encroach upon Central Park in New York City from time to time.

Here is a pack of about nine coyotes trotting along a path in the Bosque. The hind feet of a coyote settles in the print of the front feet. An entire pack might trot along a path and leave only one set of footprints. 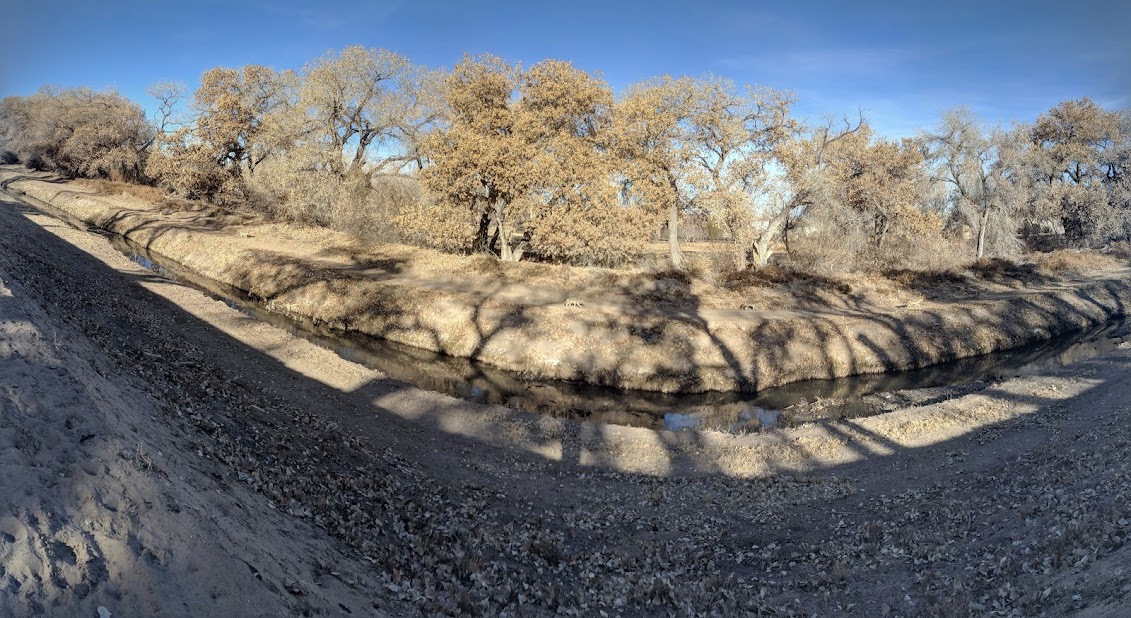 Coyotes (canis laprans) are descended from the wolf line of canids, and are cousins of the domestic version, the dog. Like the dog, which adapted to exploit human waste dumps after our species settled down after learning to produce food with in agricultural technologies, the coyote is very adaptable.

Humans evidently encountered coyotes in the American southwest, and the Aztecs referred to Coyotlinauatl as the god whose faithful wore coyote skins. The Aztec moon goddess, Coyolxauhqui, was known as one who bays at the moon. Link

Over the last hundred years or so, coyotes have spread their range to New England and the South. The DNA evidence is murky and still being worked out, but northeastern coyotes are larger (befitting a lusher prey environment) and southern ones are smaller. And, there is evidence of repeated inter-breading with wolves and dogs. Today’s coyote is a mix master slush of canine DNA.

Regardless, listening to coyotes bay at night and glimpsing them observing you in the brush is an exhilarating experience in nature.

This morning we took Owen, the namesake dog for this blog, for a walk in the Los Poblanos (the village) farm. Albuquerque sensibly protected crop fields along the Rio Grande Bosque from being transformed into residential real estate tracts.Los Poblanos combines working commercial fields (corn, alfalfa, and millet) with community plots where individuals can grow their own veggies and flowers. They also have a wonderful inn.

In Los Poblanos, we’ve observed road runners, a wide variety of birds, and coyotes in this diverse environment. And, during the winter, sandhill cranes.

The western flock of sandhill cranes spend most of the year in Northern Canada and even as far away as Siberia. But like many of our Canadian friends, they flee the frozen north to vacation further south in the United States.

The eastern sub-flock use the Platte River valley as a resting point before settling in for the winter in Texas. They are hypnotic to watch.

The western sub-flock follow the Rio Grande flyway into central and southern New Mexico where they settle in the river bottoms from Albuquerque south to the Bosque del Apache. We are fortunate to co-habit the bosque with the cranes from their arrival in mid-October to their departure to the north country in February-March.

In Albuquerque, the cranes graze in the farm fields along the river and move further afield into city park land and drainage arroyos. Everywhere, they make one or another of their distinctive clicks and clack calls.

I love wandering around Old Town as there is always so much to experience, from shops to museums to live music to festivals.

The museums are exceptional. Explora is a hands on science exploratation place for children. It is so popular with adults that they also offer adult nights.

The Natural History Museum and Planetarium has fun and unusual shores in addition to all those cool dinosaur skeletons. A recent exhibit brought all of Leonardo day Vinci’s inventions to life by making full sized working models. It was extraordinary.

Tiguex Park is a fun place for a picnic and includes some interesting public art.

If you’re interested in Zuni fetishes, New Mexico Bead and Fetish has a great collection.

And while you are in Old Town, stop in for some fun candy at Old Town Candy & Sweets.

San Felipe de Neri is an iconic Southwestern church. It is also still actively used for services, including both traditional and vampire weddings. 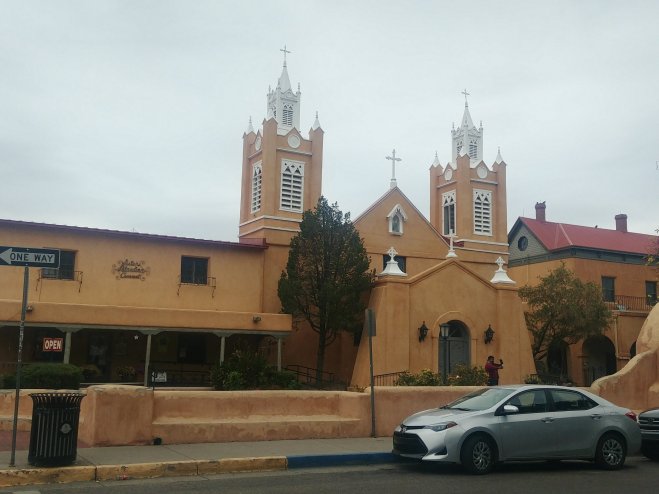 Most weekends, this gazebo is filled with entertainers playing music or demonstrating tango. 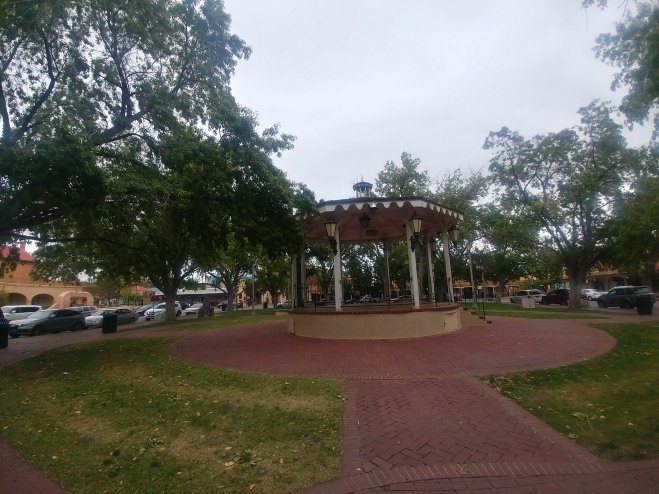 The entrance to the Albuquerque art museum sculpture garden hints at the delights inside. Its a great place to relax with a coffee and a sketchbook.

Many of the Albuquerque Museum’s sculptures are in front of the facility. 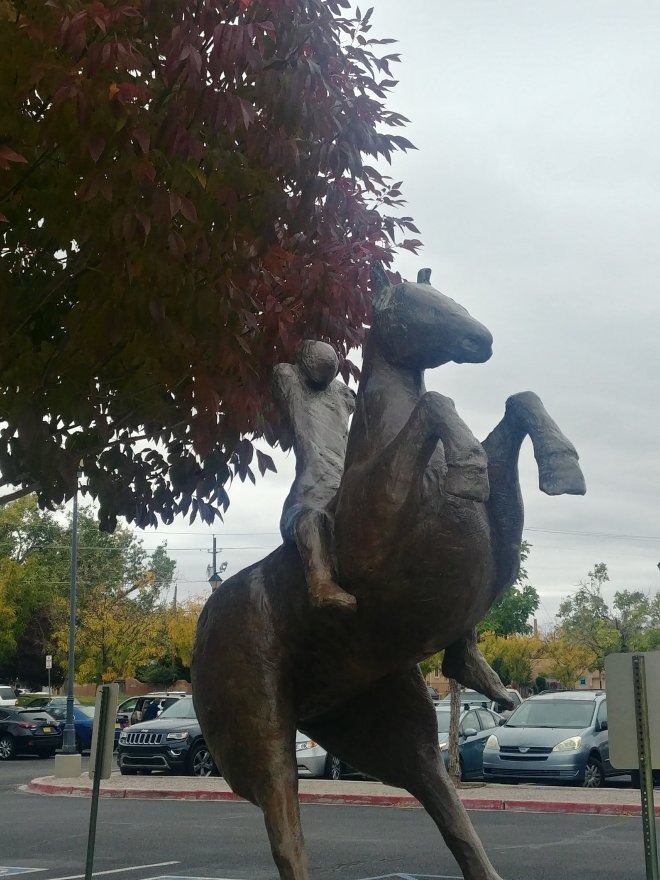 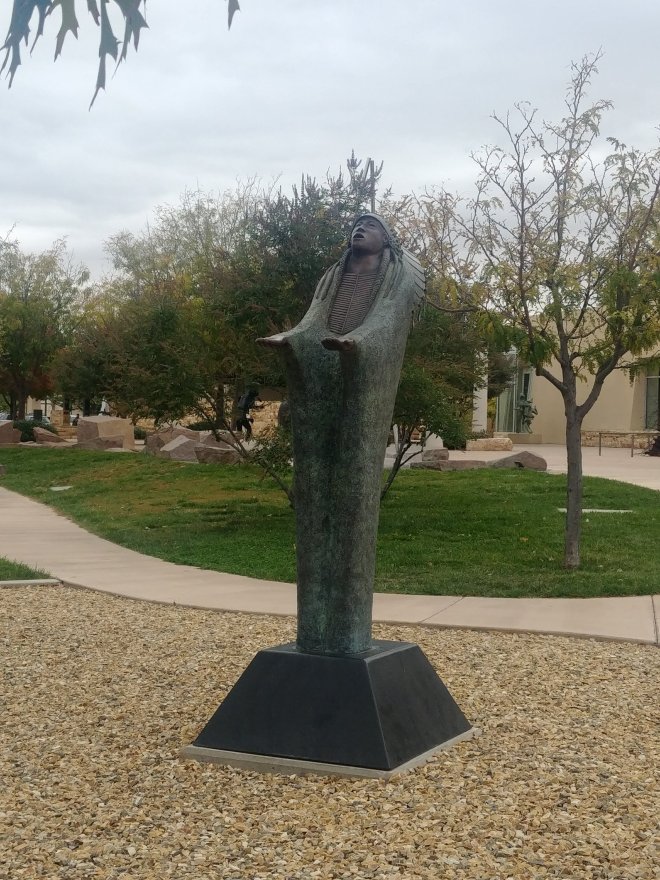 A recent sculptural addition (about border crossing) in front of the museum needs to be seen from all sides to be fully appreciated. 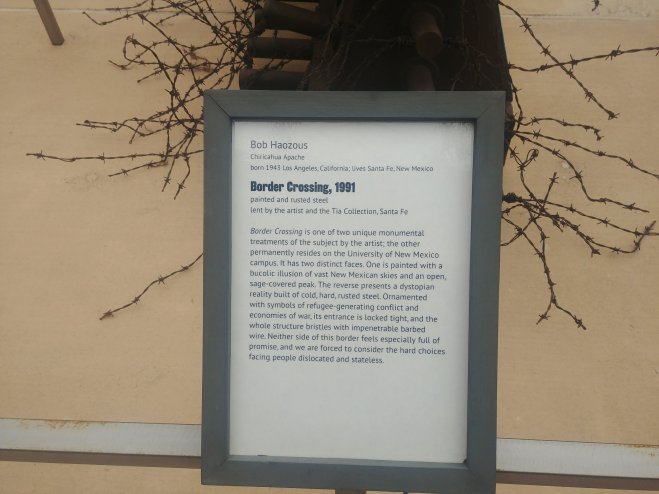 Wouldn’t you like to wander through Old Town with me? 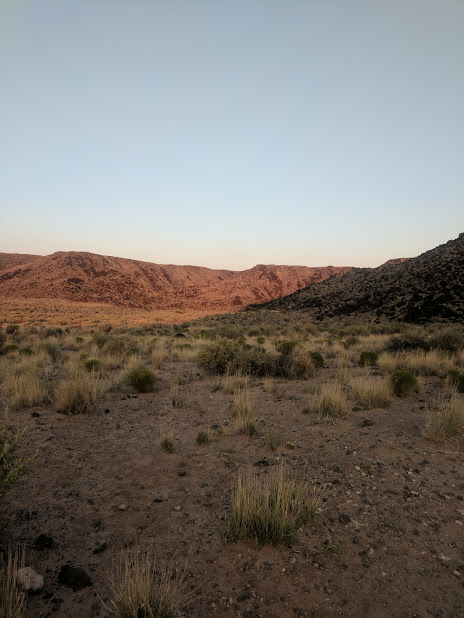 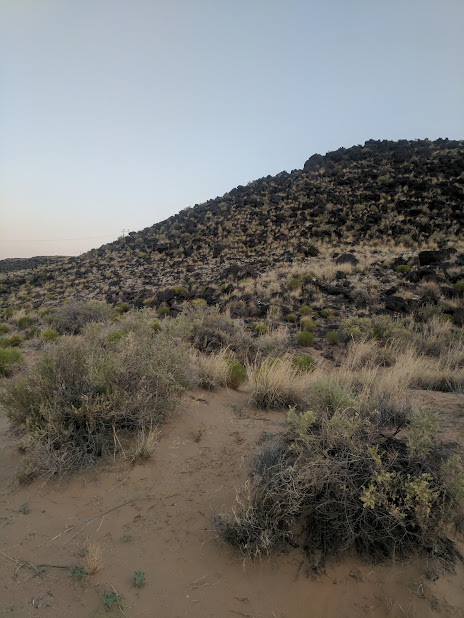 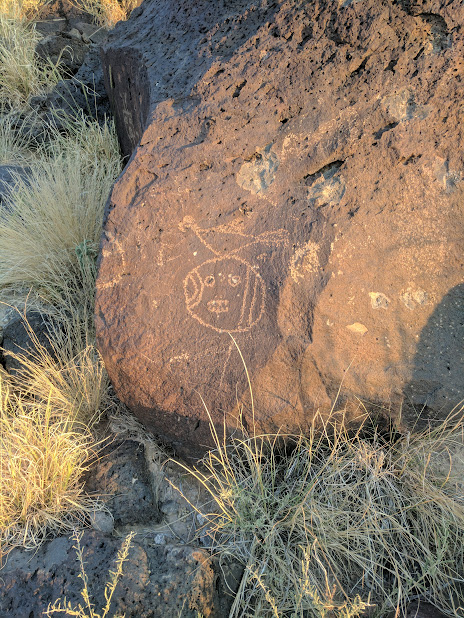 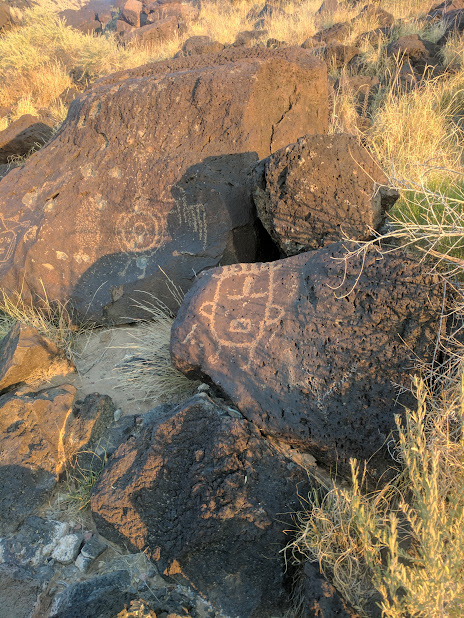 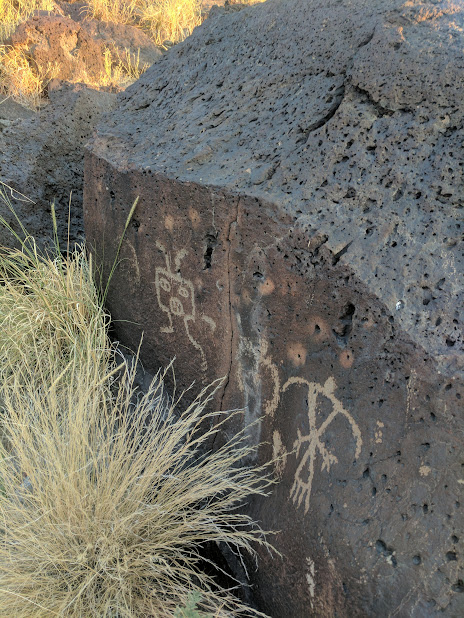 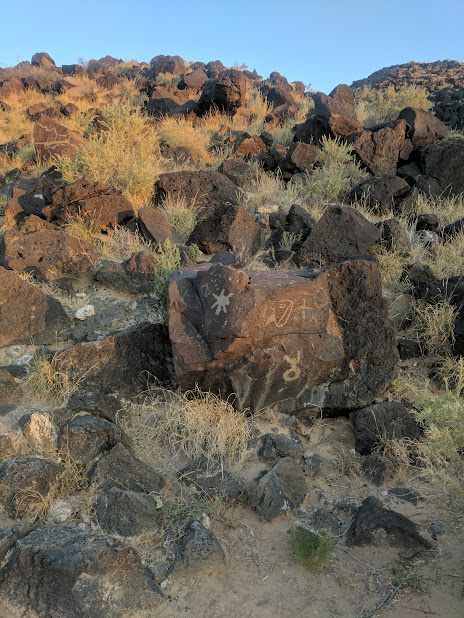