Ray and I overslept and missed breakfast at our hotel. So we compensated by rolls and coffee at a nearby candy/cafe shop and cafe. The marmalade was great and the rolls were incredible. My coffee was a hot chocolate with espresso, drizzled with chocolate. The shop was a chocolate lover’s delight.

As part of the Christmas celebration, they made an ice rink with these little pelikans to help beginning skaters 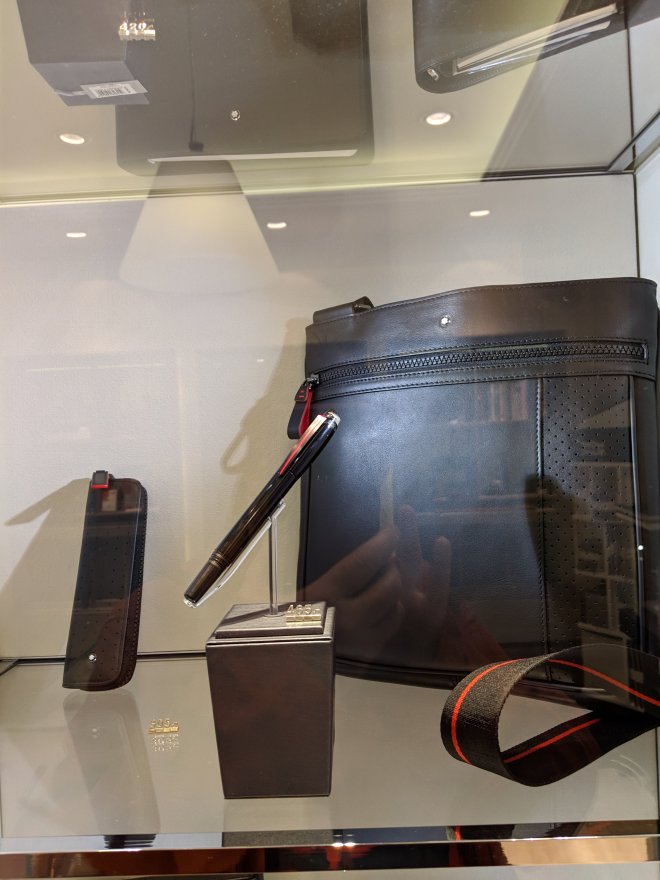 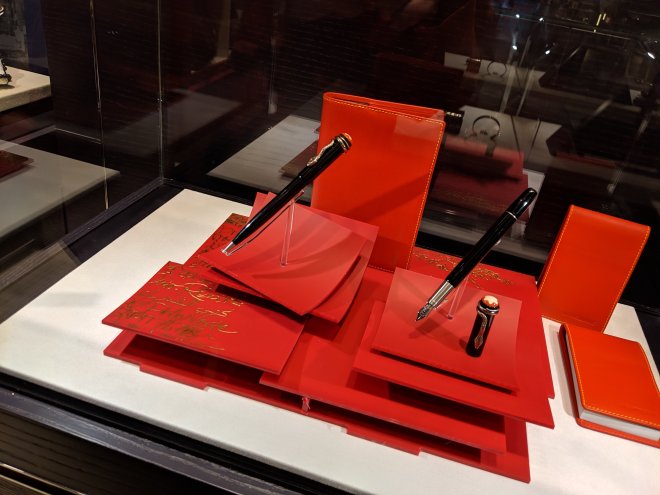 We went back to the hotel for a while, and then, because it was raining pretty hard, went to an Italian restaurant a few doors down for pizza and beer. Their door had a master card logo on it but when we went to pay, they said no credit cards. Fortunately, we had euros. And the pizza was excellent.

One of the more challenging aspects of travel is finding appropriate souvenirs for all the friends, family, pets, friends of family, and others back home. On my most recent trip to Japan, I spent over $100 just on postcards alone. Granted, Japanese postcards are some of the most beautiful cards on the planet, but some of my friends wanted more. What’s a budget constrained traveler to do? 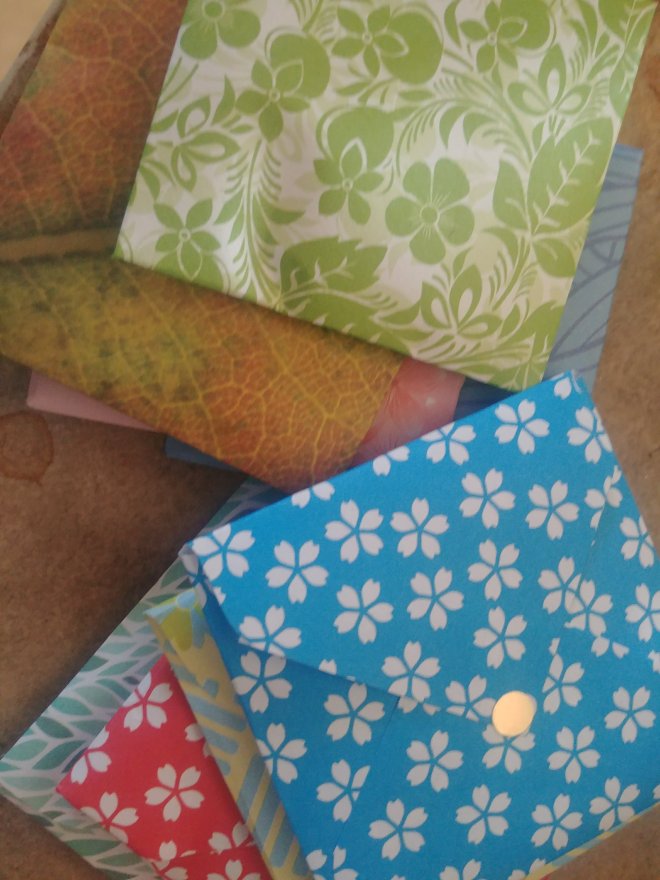 One option is to buy a pack of something and break it up into smaller gifts. In this case, I found sets of Japanese magnets, and separated them into little packages wrapped in origami paper containing one magnet each. After all, everyone’s fridge is covered in magnets. Your friend probably doesn’t need 10 more, but one is a nice memento.

This divide and conquer tactic works with lots of things–decorative chopsticks often come in sets of 10, local candies often come in sets of bars, and so on. One souvenir we didn’t get but wished we had was Japanese Kit Kat bars. They come in flavors unique to Japan: green tea, wasabi, chocolate banana, grape, sweet corn and more. If you’re still in Japan, Don Quijote, a super discount store probably has the most impressive selection of Japanese Kit Kats as well as lots of other fun souvenir ideas. (Printed dish towels are another favorite item for some of my more culinary friends. )If you’re back in the states and leaving a Japanese Kit Kat, try Amazon, Ebay, or one of the many Japanese candy subscription boxes available.

If you’re traveling somewhere where cute postcards are few and far between, try Touchnote, an app that allows you to turn your smartphone pics into postcards, greeting cards, and other cool stuff.

I used this cute picture below for several postcards. The app let me write a message, choosing a font for my message. I then addressed the postcards and Touchnote let me know when the had been mailed.

The app is most affordable if you buy a bunch of credits so you can send 20 or more postcards. Each can be a different picture and message or you can mass produce them if you have a bad case of jet lag. Another option is to get their professional membership which gives you one credit per month and lets you even customise the stamp.

So what is your favorite souvenir to give or receive? Have you ever received a totally off the wall souvenir. Or had a strange reaction to a souvenir?

For example. Our daughter taught English in China. She brought me back the Mao Zedong picture that most residents there hung on their rear view mirror. So I hung it on mine. Several weeks later, a lady races after me in a parking lot, pounding on my car hood for me to stop. “How dare you display that in your car. He’s a communist.” True. And a dead communist at that. But I had it in my car because it was a gift from my daughter, and every time I looked at it, I thought of her bravely conquering challenges in a land so foreign that our demons were their heroes.

“Perhaps travel cannot prevent bigotry, but by demonstrating that all peoples cry, laugh, eat, worry, and die, it can introduce the idea that if we try and understand each other, we may even become friends” – Maya Angelou gav

Over a year ago, my computer and phone were simultaneously attacked, and for a time I had to do without credit cards while I worked through the steps to protect myself against identity theft.  That was an experience I’d just as soon never repeat, as I’d always taken a high-tech approach to paying bills.  After changing all my accounts to manual/snail mail access (because my phone was still infected), and closing out all computer access to credit card, stock, and other accounts, I went totally manual. Going from managing all my accounts in Mint to collecting hard copy receipts and using a manual ledger was enough to make me start grinding my teeth again, a bad habit I had overcome after leaving corporate America.  In addition to collecting and organizing a mountain of receipts, I had to write down every single electronic purchase, no matter how small – including my monthly magazine subscriptions for my Nook habit.  And since snail mail was irregular at best in  Albuquerque; thanks to a constant revolving door of substitute mail people, I had to constantly request replacement statements (and not by phone, since my phone still was owned by the folks from outer Uzbekistan or some other hacking epicenter.) Furthermore, I had to manually do the math to keep a running balance (since my computer was also still in virus land, despite being totally reformatted twice). So, I honed my math skills by doing my ledgers manually, and then checking them with a handheld calculator.  Those poor people who don’t own computers should be commended for maintaining any sanity or a semblance of order in their finances. While I did manage to keep all those ledgers (one for each credit card, the checking account, the savings account, my cash, and so on) relatively balanced, it took hours, and organizing and attaching the appropriate receipts to each statement, was enough to make me mainline chocolate and coffee.

An  ill-timed pounce by my cat often sent an hour of receipt organizing flying into the air.  So what do people do who can’t use a computer?  Especially those whose math skills or memory capabilities are deficient?

Many months later, I am slowly surfacing into a computerized world again.  I have learned far more than I ever hoped to about the difference between http and https sites.  (If you’re logging in, you want a https site — think of the s as security).  I’ve also learned to check website certificates – something I didn’t even know existed in my blissfully ignorant past life.  Different vendors offer different levels of security, and it’s important to check for expired certificates, the possibility of hijacked certificates, and certificates that aren’t appropriate for what you want to do — such as a coding certificate for a site login.  Needless to say, all this certificate speak gave me an amazing migraine.  Excedrin Migraine, more chocolate and some wine was all that stood between me and a deranged run through the neighborhood.

I’ve also learned to click the Verisign and Truste seals to make sure that they are live to verify the site ownership, and to check for current review dates on McAffee seals. I still haven’t figured out the Go Daddy certificate system so I basically just avoid those websites for now.  I’m not crazy about their advertising approach, anyway, even though I like Danika Patrick when she’s driving a race car rather than shilling their products.

During my adventure in cash-land, a friend recommended taking my monthly income, dividing it into envelopes: groceries, utilities, bills, and discretionary spending. While I can see that this is an effective method for many people, for me  it was a frustrating exercise in high finance, and advanced math. I was always at the store with an envelope that didn’t have quite enough money, or I took the wrong envelope with me by mistake, or needed to stop by to pay the utilities but had left that envelope at home.  Clearly, I was a failure at the envelope method of budgeting.

So now that my electronic life is returning to semi-normal, I’m glad to leave the cash-only approach to life and try a high-tech, no cash version.  Today, I used my Starbucks app on my phone to get a coffee, bought my groceries with a credit card, and paid my Comcast bill online.  Heaven!