Nine generations after a village money lender moved to Kyoto to establish a kimono tailor shop, the family still carries on that business and operates a traditional Japanese tea shop. The ground floor hosts their businesses; the second is their residence.

Built long before the advent of electrical lighting, the rooms are oriented around two gardens open to the sky in order to admit sunlight. The smaller garden is about 6’x6’ and the larger is about 15’x15’ with a pleasantly sounding trickle of water from a hollow bamboo tube.

Two small separate alcoves shelter both a Shinto and a Buddhist shrine. An alcove denotes great esteem, so being seated near an alcove reflects one’s high status.

Safe from original money exchange business
The founder designed a room for Noh theater performances. Tatami mats covering most of the floor to suppress sounds. However, a 4’ wide section along a wall was covered by a thin reed mat so the the Noh actors could stamp their feet according to the classical format.

The traditional tea service begins with a hostess whisking powdered green tea into solution and pouring the tea into a handle-less cup. Upon receiving the cup, the guest rotates it so that the decoration faces the host as a gesture of respect. Two small sips, followed by a third slurping gulp to demonstrate the guest’s appreciation.

Our teahouse experience included a kimona try on. There are lots of layers under those kimonas! 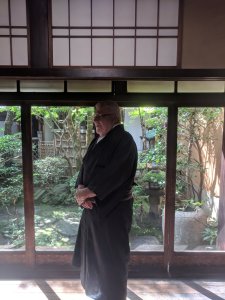