We tried origami while in Japan. Unfortunately, ours weren’t as tidy as this one but we had fun. Since then, I’ve discovered several sites with easier orugami. The sites are meant for kids but we all know that I’m a kid at heart. These sites are a great place to start an origami journey.

I made this origami fish for my youngest grandson and I’m happy to say that it came out well and that he loved it. Origami animals are always a hit with grandchildren and these are easy enough for beginners. These photo tutorials are for slightly more sophisticated origami but are so clear that anyone can achieve them.

So are you going to try making origami?

Before we travel, we try to eat and drink things that we’ll encounter in the place we’ll be visiting. For Japan, that was sushi and sake.

For Germany, we’ve been trying out wines from Moselland, as that’s where we’ll be traveling and wine tasting.

We got an order in from Total Wine. The cat bottle wine was surprisingly good. I bought it for the bottle since I love cats. (I have two. And a dog.)

As you can tell, I’m crazy for furry animals. I take way too many cat and dog related pictures on our travels.

But my own pets are my favorites– with or without wine and sushi.

To simplify the logistics of our upcoming trip to Germany, we decided to stay in one hotel for the week that we’ll be there and make day trips to other locales. We selected Koblenz as our base because it was at the confluence of the Moselle and Rhine Rivers. Link

The German Railroad (Deutsches Bahn or DB hereafter) posts its schedules online. Link We found that the DB  provides direct service from the station at the Frankfurt Airport to the main station in Koblenz. The ride takes a little more than an hour and was much more convenient than renting a car.

Examining the schedules for Koblenz, we learned that DB provides morning departure and afternoon return times to the cities and towns that we wanted to visit. We decided to use DB for our day trips as far as Koeln and Luxembourg and as nearby as the Moselle and  Rhine country wineries.

DB offers several types of railway passes for tourists on its website. We opted for a pass designed for non-Europeans  that provided seven consecutive days of train travel. Moreover, DB was offering a autumn season discount! We  ordered our tickets on the DB website and printed them out at home. When we board the train in Germany, we merely show the passes and our passports to the attendant.

When I was younger and literally traveling on a shoestring budget, traditional souvenirs were too expensive so I came up with some no cost options.

One of my first collections was pictures of streetlights. It seems like every city has its own streetlight style and some of them are really unique and fun.

On this trip, I also collected pictures of manholes. The Japanese artistic district manholes were truly stunning.

Another friend collects pictures of doors and doorways. As you might imagine, she has found some beautiful examples.

If you want mementos that can be placed in a scrapbook, train and museum ticket stubs are great.

In Japan, most chopsticks come with beautifully decorated paper chopstick covers that would make great add ins to a scrapbook page.

The only limit to cost free souvenirs is your own imagination. What will you collect?

Ray and I had so much fun trying out Taiko drumming in Tokyo that we decided to find classes in New Mexico. Bushido Kenkyukai is a well-known dojo for taiko drumming and martial arts. We went to an introductory class which included demonstrations by local students and practice drumming.

As usual, New Mexico artists have added their own twist to a traditional Japanese art. The New Mexico version includes more drummers, extra instruments, and special riffs that aren’t heard in Japan. Still, the foundation is traditional so it’s a fascinating fusion of cultures.

For practicing, since taiko drums are expensive, many artists make use of old tires coveted tightly with packing tape.

It doesn’t give the depth of sound that a real drum does but it definitely is good for an active taiko workout.

So, are you tempted to try taiko drumming?

Taxis were delightful. They were always immaculate and the seats were invariably covered in white lace fabric. When it was time to get out, the doors opened as if by magic–though I’m sure it was through the driver’s command.

In Kyoto, foreigners aren’t particularly welcome as they overwhelm this small town. In that town, taxi drivers hesitate to pick ip foreigners. so a whole separate cab business has developed: “foreigner friendly taxis”. The term is emblazoned on the taxis so foreigners know that they can effectively flag these taxis down. Not surprisingly, these taxis are often driven by foreign immigrants, who often also speak English.

So would you be like me– a little worried about inadvertently soiling the pristine white interior of a taxi? (I’m a klutz by the way.)

We were planning a trip to Boston for a business meeting and said, “Hey! We’re well along the way to Europe. Let’s go!” We settled upon Germany, because Brenda wanted to finally put her German language minor in college to good use.

Lufthansa offered flights from Boston/Logan to Frankfort, so we opted to visit that area. Once there, we considered our options: travel hither and thither, staying in various places, or establish a base of operations in one place and explore the environs. We opted for the latter, eschewing the multiple unpack/pack cycle. We also travel light, so readily finding a laundry with time to use it is a must. (At least, our seatmates on the flights home would prefer it.)

The next decision was where to establish our home away from home. There’s where the DK travel guides for Germany came in handy. The Rhineland offers an abundance of pleasant towns to choose from, so we felt we couldn’t make a wrong decision. We opted for Koblenz because it was convenient to both the Rhine and Moselle attractions, and was large enough to provide lots of different fun things to do and enjoy over our stay.

What about touring the countryside? Car or train? We opted for the convenience of the German railway system. We will use their affordable and convenient rail pass to avoid dealing with auto insurance, parking, and foreign language highway signage. The train system offers direct service from the Frankfort airport to Koblenz and convenient service from Koblenz to other towns and cities that we wanted to visit. And we won’t have to worry about driving after Wine tasting our way through the countryside.

Just a few more details to take care of and we’ll be ready for our trip. What about you? Where in Germany would you like to go?

I have never had apple juice that tastes as good as this from Nagano, Japan. It tastes like biting into a fresh apple, without the effort, of course. I drank a whole bottle in one day because it was so amazing.

They also make a Fuji apple sake that tastes like fresh apples, but with an alcoholic kick. Yum..

At the train station arriving in Nagano, a delightful Japanese town that hosted the 1998 winter Olympics.

These are cool statues along the access road to the shrine.

We were drooling as we passed the shops with their food samples in the windows. This is the restaurant we came back to for soba. Yum.

There is a 7 springs hike nearby.

And here is a gorgeous hand painted manhole cover celebrating the famous apples from the region. They are deservedly famous. I became addicted to the fresh apple juice, apple sake, and fresh apples.

A mn so outlines the sacred places at the temple.

The beautiful shrine appears embraced by the trees.

A fruit stand where we bought one of the famous apples.

Godzilla is the iconic Japanese dinosaur, having starred in several movies since Ishiro Honda brought him to life and international acclaim in the 1954 film, Godzilla.

To no great surprise, this lovable (to the Japanese and the world-wide multitude in the Godzilla cult) monster has been further monetized beyond movie tickets, toys, and stuffed animals. In revving  up to the 2020 Olympics, Japanese entrepreneurs have written “the Godzilla experience” into destination tourist attractions, including a hotel and specialty foods. (For a sampling, navigate to this link.)

Brenda took this evening picture of the hotel with Godzilla peering over the McDonald’s golden arches at the passersby. 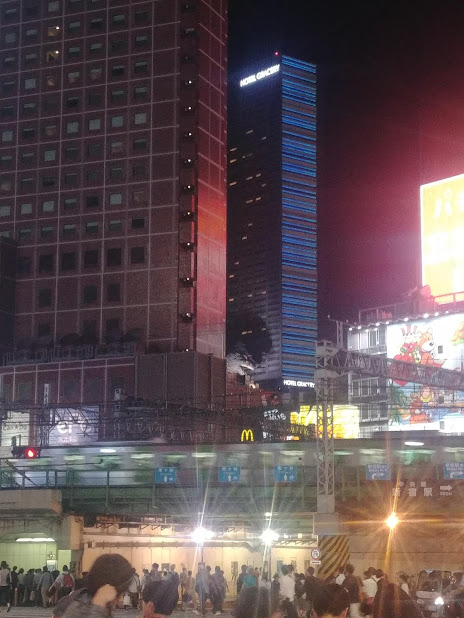 While wandering through the gift shop after making soba noodles for lunch, I came across dinosaur junk food products.

My initial thought was that these products were derived from the Godzilla craze. However, that wasn’t so. A Google search revealed that important real dinosaur fossils had been unearthed in the Fukui Prefecture and elsewhere in Japan. The Fukui Prefectural Dinosaur Museum in Katsuyama is a leading dinosaur museum in Asia and houses many of the Japanese fossils. The gift shop was in Fukui Prefecture and was celebrating the dinosaur discoveries that were found more or less in their back yard.

As with Godzilla, entrepreneurs have found a way to profit from the dinosaurs. In Tokyo, where else?, the Henn na (Weird) Hotel is staffed largely by robots, many of which were designed to be dinosaurs.